WARRINGTON HEAD OF THE MERSEY

Sunday 13th February saw the first event of 2022, attended by adult and junior crews. Thanks to Ray Percival for towing and getting the boats safely to Warrington. Not the kindest of days, cold with a strong wind, high water levels and a fast stream.

Unfortunately, after a good first leg on the two leg 1800 metre course, Chris Rycroft and Paul Campbell capsized in the difficult conditions at the upstream marshalling position. They were safely recovered to the boathouse and their boat brought back by another safety boat. Due to the difficulties in the upstream area, the course was shortened and later divisions found the conditions easier.

The outstanding performance of the day was in WJ15 1x, where Grace Rhead won her category and recorded the third fastest time of the day for women’s singles (the fastest time was set by Elle Kadir of Warrington, who is one of the fastest junior scullers in the country and a GB triallist). Of the Liverpool Victoria crews entered on Sunday only the Womens four set a faster time than Grace.

Warrington Head of the Mersey is the first of the Spring Head Races and we hope that Liverpool Victoria crews will continue to improve over the coming weeks.

Stop Press: Liverpool Victoria’s own GB triallist, Emily Bernhem continues to improve her 5k ergometer times with a new test result for February 2022 showing that she is moving in the right direction! 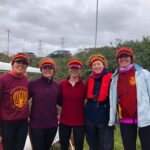 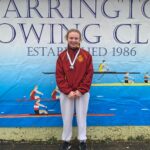 Fort Austin heads off to a new life in Egypt

No Replies to "WARRINGTON HEAD OF THE MERSEY"