Fort Austin heads off to a new life in Egypt 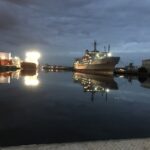 On Saturday 18th December 2021, a typical cold, wet, overcast day on the West Float, a dozen or so LVRC juniors and their parents along with the junior support team, braved the weather and waited to say farewell to the former Royal Navy Auxiliary supply ship, Fort Austin. Four tugs arrived to take her safely out of the docks and into the river. Her Sister ship the Fort Rosalie is still moored up awaiting her turn.

Both ships were decommissioned earlier this year and ceased to belong to the Royal Navy, we had initially thought that they were to be sold for scrap but instead both have been sold to the Egyptian Navy. So their working days are not yet over but will continue in warmer waters than ours here in Birkenhead .

The ships have been moored in the West Float for around 5 years and have become an integral part of our landscape, being used as markers for training pieces and lighting up the waters during night rows. We will have to become re accustomed to the extra width we have gained, three lane racing anyone…?

It’s the end of another chapter on the dock we call home and we look forward to the next development to challenge our steering skills.

WARRINGTON HEAD OF THE MERSEY