The juniors turned out in force for Northwich, entering four singles in the First Division, a coxed Open J15 quad in the Second Division and a coxless quad and two doubles in the Third Division.

There were wins for Patrick Saunders in Open J15 1x and for Grace Rhead in WJ15 1x. Grace’s time was nearly a minute faster than the second placed WJ15 1x and was the fifth fastest WJ single performance of the day. Grace has benefitted hugely from the generosity of Guy Weatherly (Life Member) and his son Dan, who has loaned Grace his Empacher single for Grace to compete in the Junior Inter-regional Regatta in Nottingham on 23rd April.

Also at Open J15, Haig and Ethan Bainbridge showed how powerfully they can perform by winning Open J15 2x (Band 2), in a time that would have put them third in the Open J18 2x category. The Vics’ own Open J18 2x unfortunately collided with the bank just before the Finish but extricated themselves from the undergrowth and finished strongly.

Grace got herself a second first place by joining Zahra Wilkinson, Emma Large and Emily Bernhem in a WJ18 4x- (Band 2), beating Pengwern and North Staffordshire.

Thanks again to Lesley Kuguloglu for the coaching input she has made to our crews, to Ray Percival for towing and for all the crews that attended and cheered on their fellow Vics’ members.

Our next event is our own Merseyside Regatta on Saturday 30th April. Please give your name to Sam Fairbanks if you can volunteer to help with the running of the event. 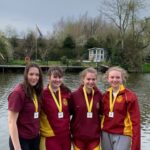 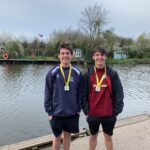 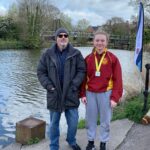 No Replies to "Northwich Spring Head 2022 - successes for Vics' Juniors"